An insight into one of the great Lakeland fell races, taking my camera with me and trying to capture the atmosphere from the back of the field.

Starting in the Langdale valley from Old Dungeon Ghyll, the field is soon strung out to single file. It’s wise to rein in any frustration at this point and conserve energy. There’s a long way to go.

With the exception of the elite runners at the head of the field, for most of us, the first climb is a fast walk, with the odd easing of the gradient to allow for a bit of running.

The race route follows a good track all the way to Stickle Tarn, but there are opportunities to take the odd short cut and cut out some switchbacks. It feels like a long way up already but the climb goes on.

For just about the first time the route levels off to allow for a bit of good running around the edge of Stickle Tarn. It feels like we are properly in the mountains now, with nature putting on a great light display, the sun breaking the clouds.

Continuing to make the most of a rare bit of flat running we make progress towards the bottom of the climb up Pavey Ark, the long ridge of Blea Rigg providing a dramatic backdrop.

The climb kicks in again as we head up towards Pavey Ark, although we skirt to the right of the summit to finally reach Thunacar Knott at 2351 ft.

The first climb finally completed, we can enjoy some good running on a wonderful grassy track. We are ultimately headed to the peaks in the distance, Bow Fell on the right and Crinkle Crags on the left. The lump to the near left is Pike O’Stickle. This is the most prominent landmark on the Langdale skyline and remains in sight for much of the race.

Making the most of a fast grassy descent. The peak of Harrison Stickle provides the backdrop.

Having been fortunate enough to take a good route through the bog and not sink too deeply myself, it’s hard to resist lingering a few minutes to see how others fare. This runner doesn’t do so well. I’m expecting the next group to take a slightly different line, but the runner in red looks very focused on her race. 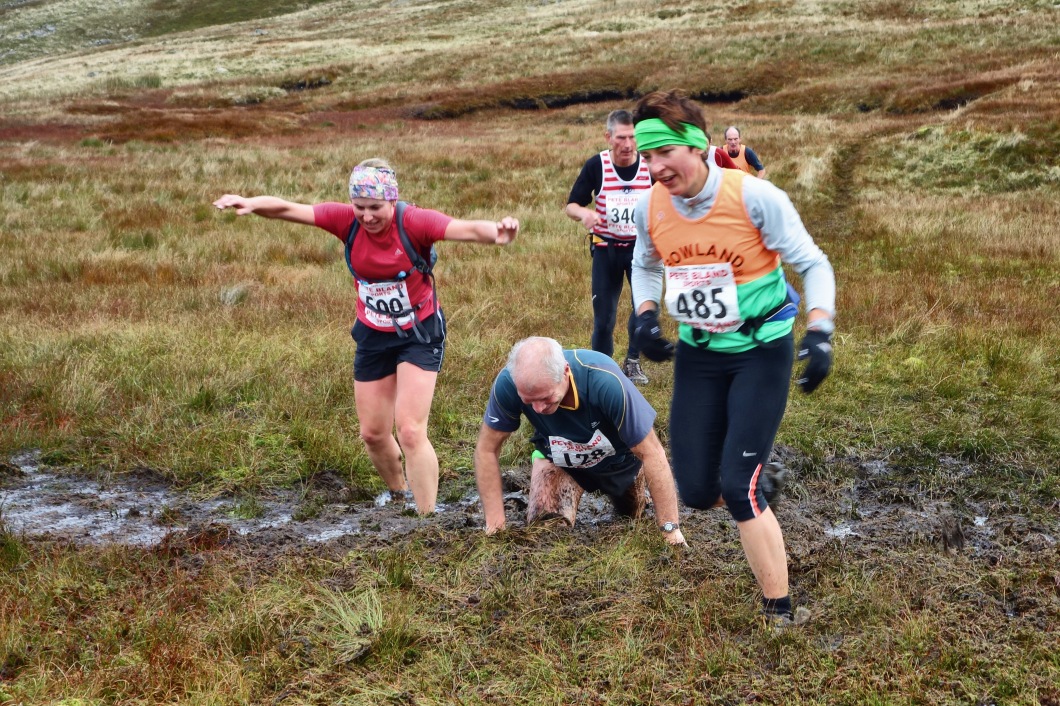 No.128 is in but No.500 is looking good. No.485 has deftly used No.128’s head as a stepping stone and has come through unscathed and remarkably unmuddied!

On the line she’d taken, No.500 was always doomed. I suppose I should have warned her. I was left with some catching up and explaining to do. 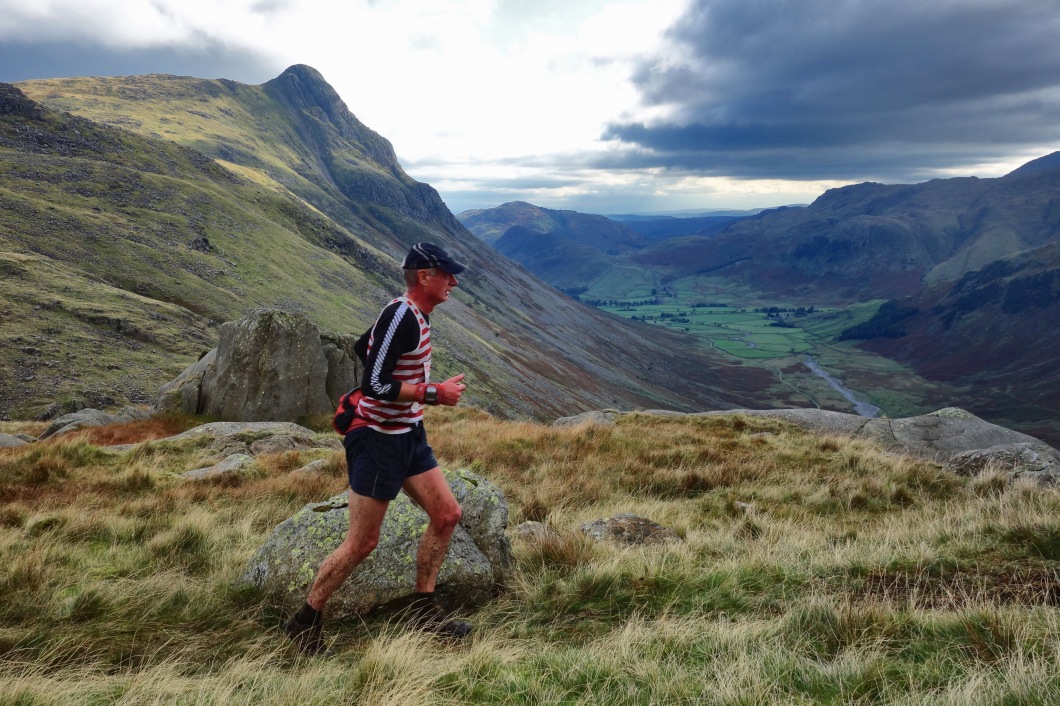 A high-level traverse takes us from Stake Pass to Angle Tarn and a magnificent view right down the Langdale valley to where we started. Pike O’Stickle dominates the skyline.

In the mist, this section is tricky, but today it was really just a matter of following the runner in front, trusting that the elite runners know the best lines well and have taken the rest of the field on the optimal route. When the clag is down this race takes on a whole other aspect. 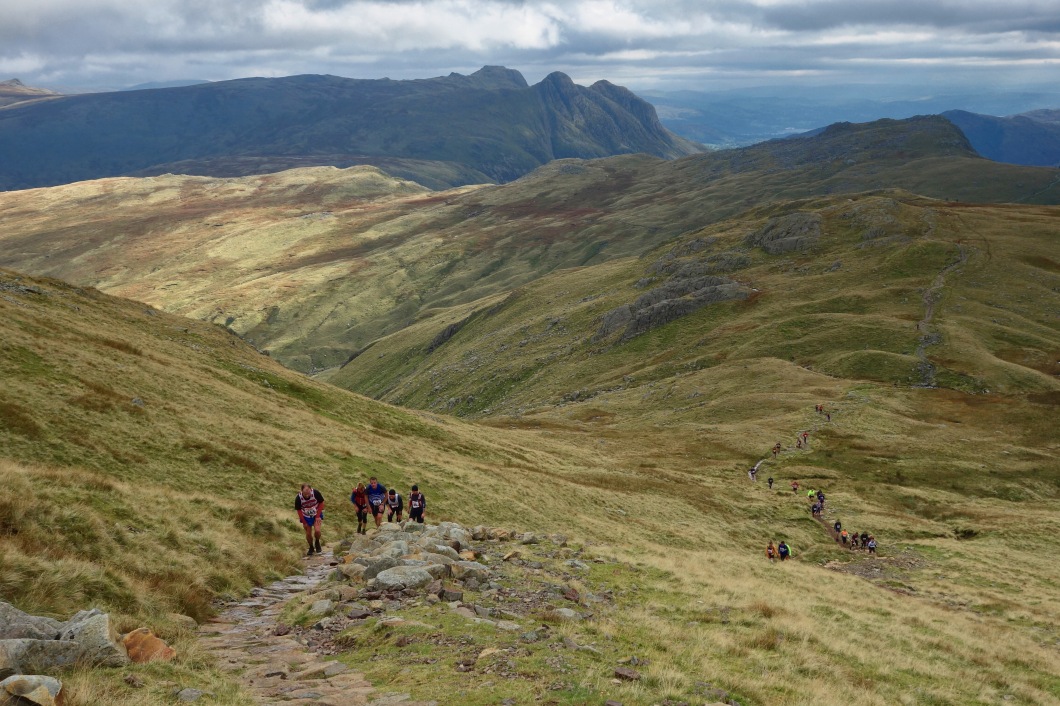 As we reach the shoulder of Esk Hause the Langdale peaks have receded into the distance. This is just about the furthest we get from the start of the race before turning back on the other side of the horseshoe.

Having turned around at Esk Hause, we take a narrow and difficult path under the flanks of Esk Pike, climbing up towards Bow Fell, occasionally being enveloped by cloud as we approach. 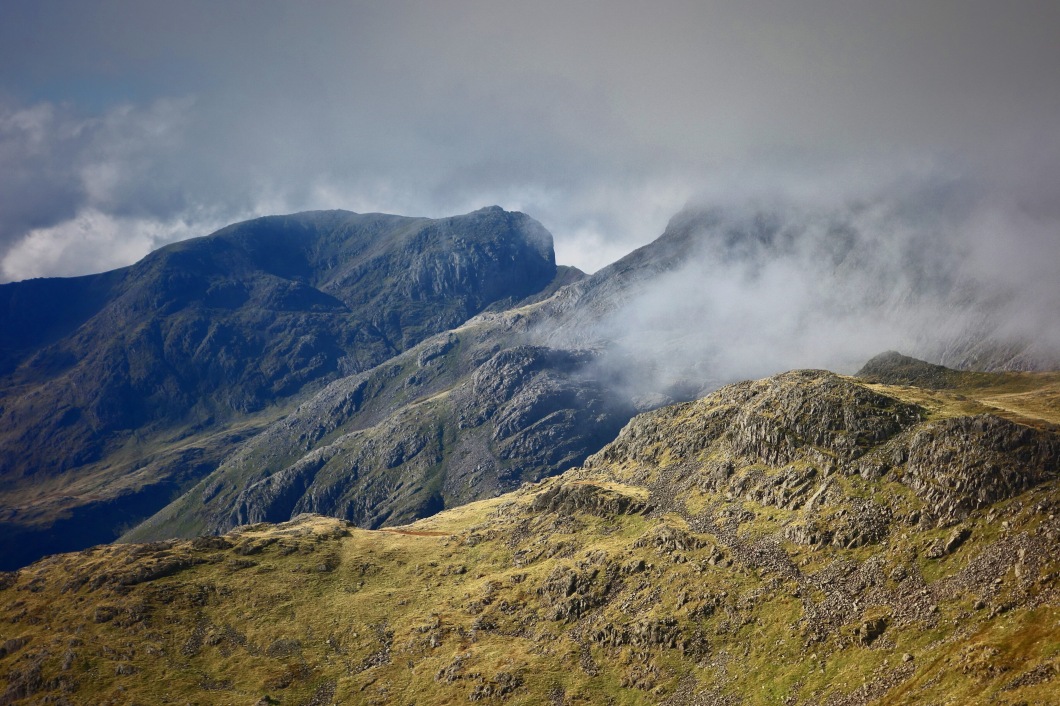 We’re now on the steep descent from Bow Fell, looking across to Broadstand, the sheer cliff which separates Scafell from its higher sibling, Scafell Pike, which sits in the cloud. The underfoot terrain is difficult but it’s hard not to be distracted by the views looking west. The legs don’t mind the stops taken to capture this majestic scenery. 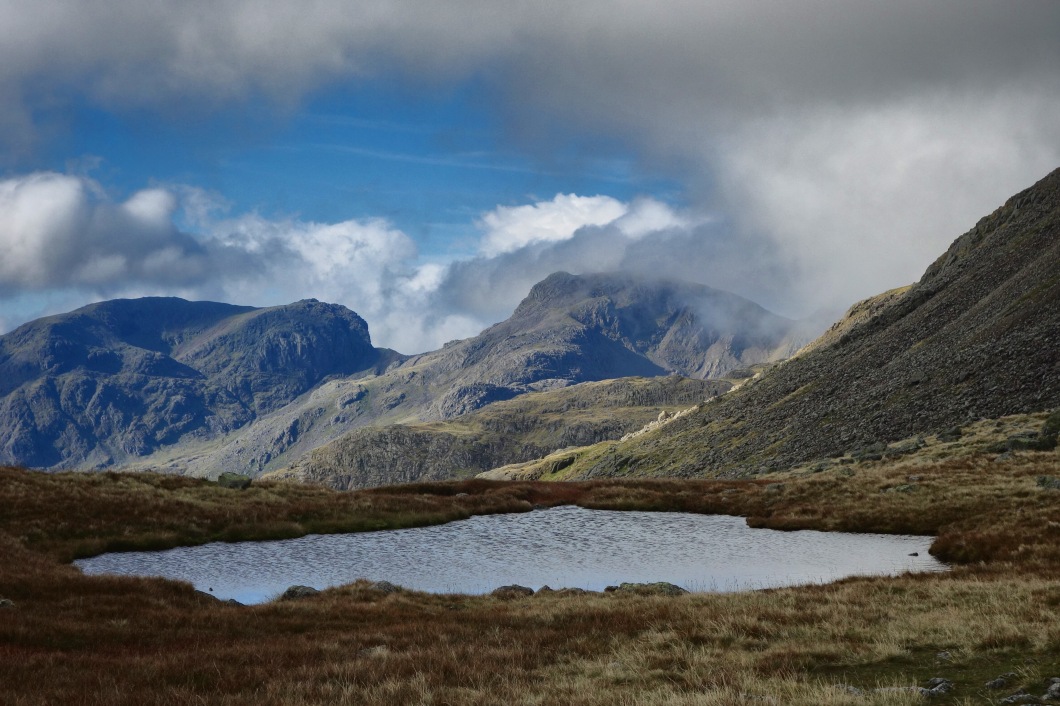 With perfect timing, the clouds clear to provide a view of England’s highest mountain, Scafell Pike, at the ideal location to take a photograph. Racing is put aside for a few minutes as I find the best vantage point for the shot. The light is perfect.

Climbing to the highest point of the route, Bow Fell at 2960 ft, scrambling over the summit boulder field. We’re just about in the cloud here but the sun isn’t too far away. 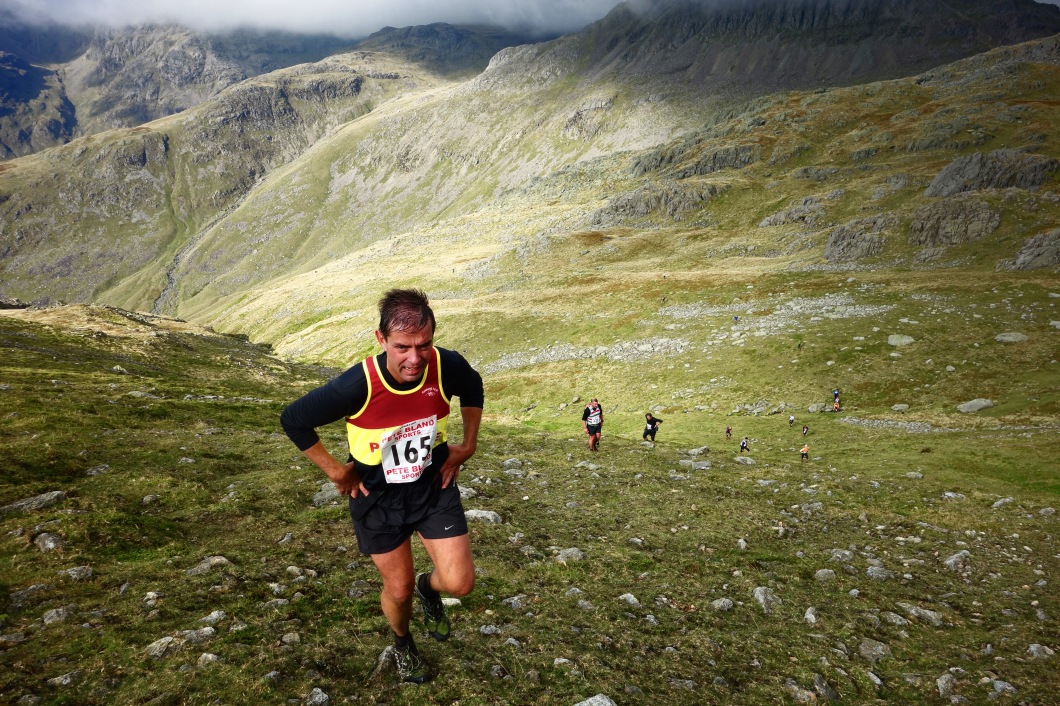 The penultimate climb to the penultimate peak of the event, Crinkle Crags. The walking is becoming quite slow now and the field well spaced out. At this end of the race, it’s not so much about competing against each other but supporting each other to get around. There’s a tremendous sense of camaraderie. 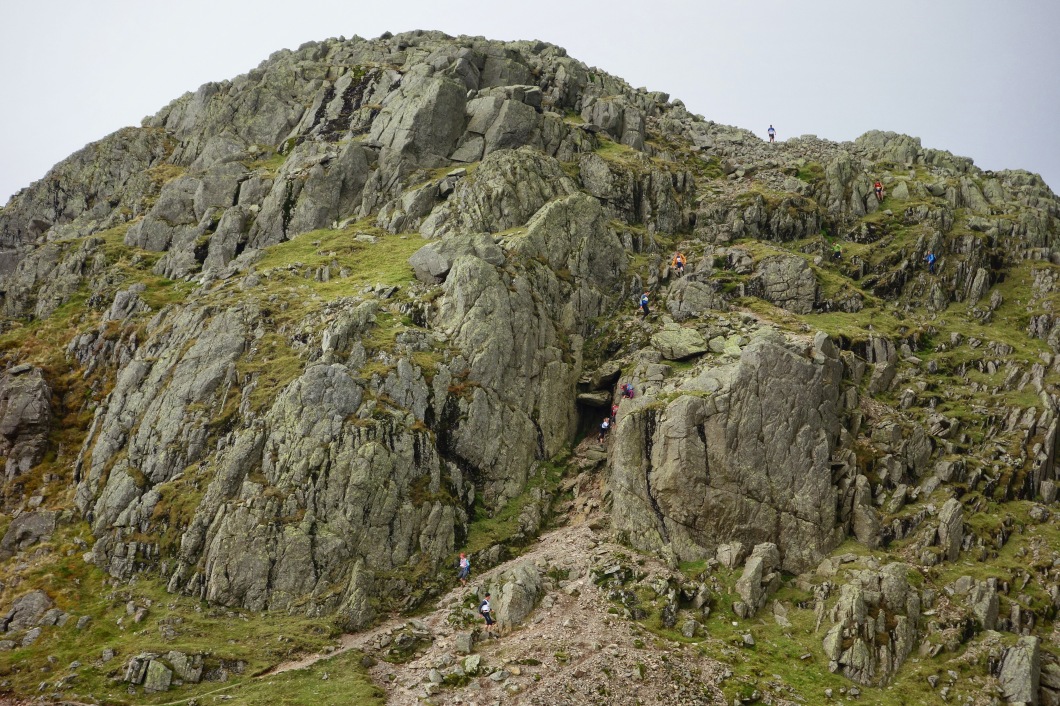 Coming off Crinkle Crags, you can avoid the “bad step” if you know the route but I unthinkingly follow the main track down. The holds are good but the 20ft drop can be a little intimidating for some. The lady behind me is a little anxious so I take a moment to guide her feet to the holds. Once down, she takes off and I look back to see more runners climbing slowly down. I worry now that they’ve all been following me.

Despite appearances here, fell running is not so much about enjoying the magnificence of the mountains but about the ego. We do it to appear heroic and look good. The real reward is not the views of the landscape but the admiring glances from fell walkers! 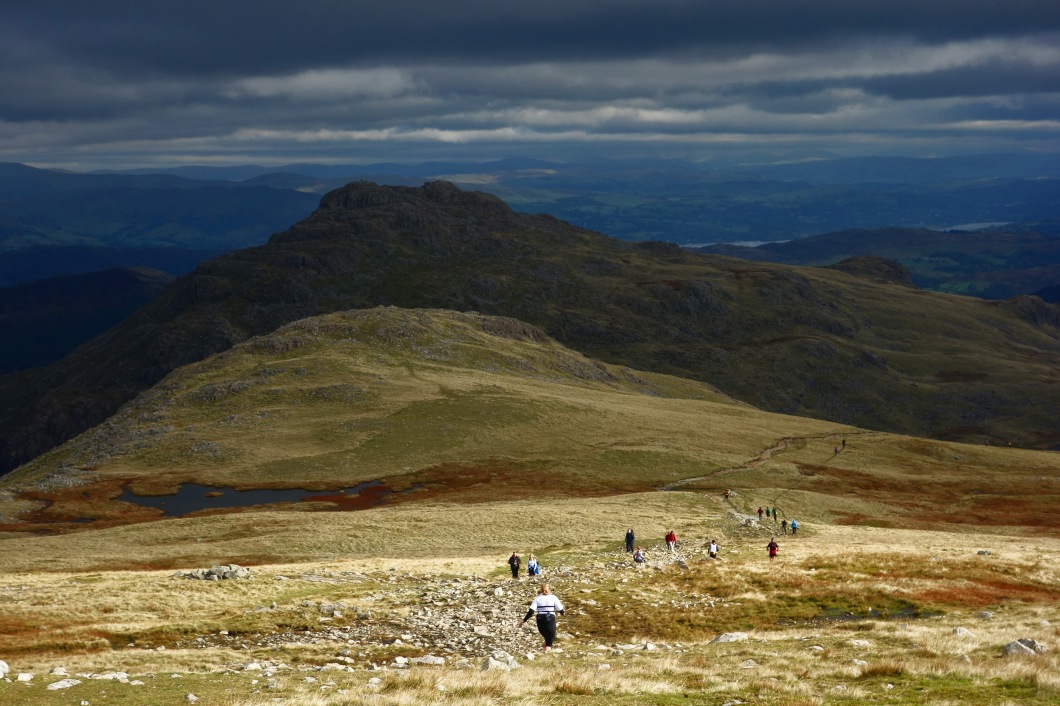 A fast descent takes us all the way to the foot of Pike of Blisco, the last summit of the day. This is not the near one in the sun, but the furthest one in the shadow, We’ve been very lucky with the weather. It’s been raining to the east of us pretty much all day.

After checking in at the summit of Pike of Blisco, we soon get sight of the finish, which can be seen amidst the event car park in the valley on the far right. It seems like a long time ago now since we were climbing up to the peak opposite. Pike O’Stickle remains prominent on the skyline, to the far left.

It’s mostly good running all the way to the finish but the field is now very spread out. This is the last chance to enjoy the high-level views and the amazing light before hitting the valley, the finish line, and a beer – or two.

For the record, the route is approximately 21 km (13 miles) in length with 1,450 metres (4,760 ft) of ascent. This edition was won by Ben Abdelnoor in 2hrs 7mins. I finished 351st home out of a total of 381 finishers in a time of 3hrs 50mins. The record for the event is one of the longest standing in fell running history, dating back to 1977 when Andy Styan sped around in a scarcely credible 1hr 55mins.